Design and Build Your Home for Aging in Place

Personal
Bob grew up in a military family where his father was a career Army officer (and served 10 years with the Green Berets) and his mother a homemaker, originally from Winthrop, Massachusetts. Bob grew up mostly in Fayetteville, NC but also lived in Germany, Virginia and Kansas. His wife, Pamela, also grew up in a military family and is a career educator. She graduated from James Madison University, Campbell University and received her doctorate from NC State.  She is currently is a Project Manager for the US Department of State. Bob and Pam have three sons, Martin, Jeremiah, and Spencer. All three sons are Eagle Scouts and high school varsity cross country runners. Martin graduated from Brown University in 2001, UNC-Chapel Hill in 2005, and completed his PhD in Film Studies from NYU in May, 2012. He currently teaches film studies at The Catholic University of America in Washington, DC. Jeremiah graduated from Harvard in 2009 and currently owns ReadyPower in New Orleans. Spencer attended Appalachian State University and currently lives in New Orleans. Bob and Pam currently live on Capitol Hill in Washington, DC.  Bob is currently a writer/editor for Office of Inspector General of the U.S. Department of Housing and Urban Development. 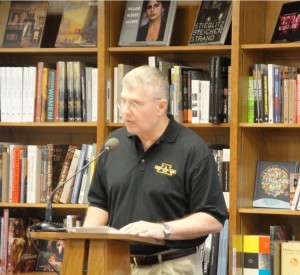 Bob reading from his book, Natural Born Heroes, at Politics and Prose bookstore, Washington, DC in 2011

Regional Sales Manager for Timberpeg South in Asheville, NC
Designed, sold and served as technical advisor for the construction of high- end custom heavy timber homes. Later was president of Timberpeg Pacific, based in Reno, NV, introducing Timberpeg to the West Coast

Director of Sales, North American Housing Corporation in Roanoke, VA
Managed nine regional sales managers and the home model home center for one of the largest modular home manufacturing company in the US

Director of Operations, Carriage Park Development, Hendersonville, NC
Managed land development operations of a gated community selected as one of the 100 Best Master-Planned Communities in America.

President, Biltwright, LLC, Asheville, NC
Started a custom construction company in 2006; projects included a $3M custom home and a small boutique hotel. Temporarily closed company in 2007 to return to active duty in the US Army and serve in Afghanistan in 2008 as the operations officer of a Provincial Reconstruction Team, which assisted Afghans in building roads, schools, clinics, and micro hydroelectric generating plants in Panjshir province. Awarded Bronze Star Medal from the CG, 101st Airborne Division. Continued service as a strategic planner on the Army staff at the Pentagon and later as a team leader on the Gravesite Accountability Task Force at Arlington National Cemetery. Retired from the Army in September 2013 and resumed with Biltwright, LLC.

Theme by Anders Noren — Up ↑